Whilst every element of the exhibit was powerful, one in particular resonated the most: the women in the video-portraits make periodic bird-calls across the void of the room to each other, calling out and checking in, seeing who else is out there and making sure they’re all ok. This is what we need to do for each other as women, especially as we grow older. 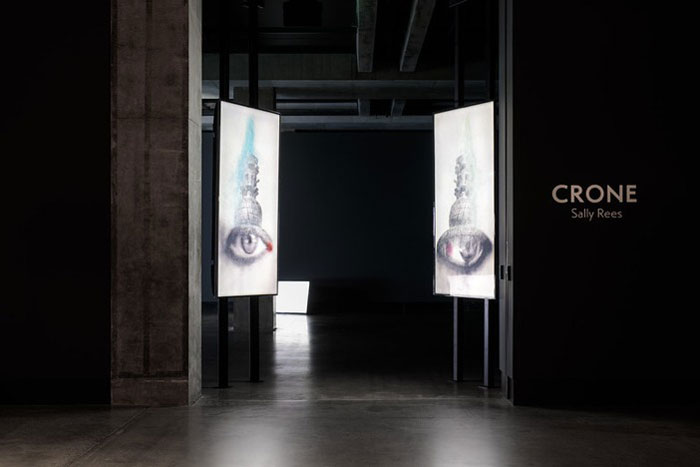 Sally Rees is a Tasmanian born artist living and working on Palawa country in Nipaluna/Hobart who works across time-based, static, live and hybrid artforms. Rees is motivated by mining her autobiography to explore similarities between modes of clinical psychology, occult practice, meditation and protest – all elements that seep from the dreamlike screens that illuminate her animated, painted video-portraits.

One of the driving questions here at Elli (and in our series Age Against the Machine) is what is the difference between becoming an elder, and becoming elderly. Entering the CRONE exhibit felt like a part of the answer to that question. Naima was lucky enough to correspond with Sally and hear more about her approach to ageing.

Naima: When creating Crone – were there moments of fear or vulnerability about stepping into this topic and taking on these paradigms?

Sally Rees: Not really: I’ve never really seen ageing as something to fear. My parents are pretty healthy, interesting (and interested) people in their 80s now, and I’ve lived my life in a body that never conformed to the stereotype of youth and beauty anyway. So my immediate models for ageing have been very positive and I never really felt the onset of age would be a significant loss of some sort. I completely understand that’s not everyone’s position though. Either way, I think it’s important to think realistically about what you want for yourself and what you need to get there.

Naima: What do you think is the difference between becoming elderly, and becoming an elder?

Sally Rees: I guess most simply, ‘elderly’ is an unavoidable state of being, whereas ‘elder’ denotes a role. I see a powerful community role to be filled by elders, but it needs to properly acknowledge being ‘elderly’—the wear of ageing on the body and mind are somewhat inevitable and need to be accounted for and supported.

I believe a better support system for our ageing population must be devised at a Governmental level. It often seems the Government’s vision of what it means to be elderly is based on their own, very privileged and limited experience. That they don’t recognise, or they find rare the idea that someone might not have much Superannuation (if they’ve worked for themselves or in a gig economy or that they are prevented from regular work by disability) or that they might not own their own home, or have family who are in a position to look after them.

I’d love to see the pension revert to an earlier age of entitlement (or a complete welfare conversion to a Universal Basic Income – either or), investment in affordable housing (both for rent and in getting more people into their own homes), greater Medicare coverage including optical and dental, generationally inclusive social hubs, subsidised gym memberships for older people and subsidised further education. Decent, inexpensive broadband, delivered with simplicity, for those becoming less mobile to be able to reliably access these things too. I’d also really like to see female elders, as a desired inclusivity target in all cultural programming.

You didn’t ask me about those things but it’s part of my personal approach to my own ‘croning’ to challenge our systems of Government to be better whenever I can, and this kind of support is actually what will make the most significant difference in allowing ‘the elderly’ to also own their immense value as ‘elders’.

Naima: Why is it so important that we explore the topic of women & ageing in the arts?

Sally Rees: Art is what creates new paradigms. A desired model for ageing didn’t seem to exist for me – the go-to cultural symbols for an older woman seem to be the cuddly grandma, the hunched figure shuffling to the shops for cat food or the wealthy retiree with a tasteful haircut living high on her and her spouses smart investment and superannuation choices. I don’t identify with any of those, so I wanted to create a different version of the ‘older woman’ paradigm to add to the collection.

Naima: How has Crone helped you in your own ageing journey? How is your creative process changing as she ages?

Sally Rees: It’s honestly too early to tell. Making the work and absorbing responses to it have reinforced my ideas about what I want for myself. Finally my model exists, and she has witnesses. Now I just keep moving forward to see what happens next. Ask me in another 10 years!

You can catch CRONE at MONA through to November 2021 and we simply couldn’t recommend it enough. In fact, we really want to go back just to see it and spend time with it again.